With backsplash, shoe molding, and other projects dragging on a bit, Mike and I felt ready for some quick wins, some improvements that would provide significant impact and satisfaction with relatively small time and financial commitments.

The main one we chose to veer toward for a bit recently was DIY photo ledges for our family room. 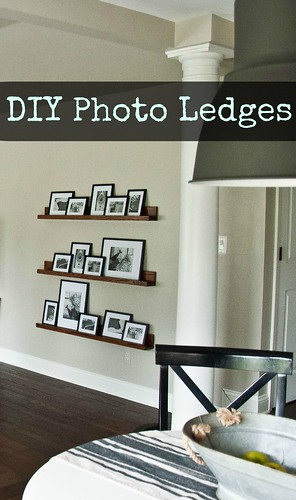 Over a year ago I bought a couple of gallery wall kits, hung the templates on the walls on either side of our TV, decided I didn't love them, and stored them in our basement until a better idea came along.

My goals for this wall included the following:

The better idea I was seeking came in the form of Ana White's $10 Photo Ledge plans. Mike has gotten pretty used to me texting links to such things with obnoxious statements like, "These would be easy, right?"  Someday I would like to see his face when he gets one of these messages.  Actually, it's probably best for both of us if I don't.

While those backsplash, shoe molding, powder room finishing, and other tasks sat (and still sit) on hold, Mike spent some time getting sawdust everywhere rekindling his love of woodworking and impressing me once again with his ability to make my visions a reality. 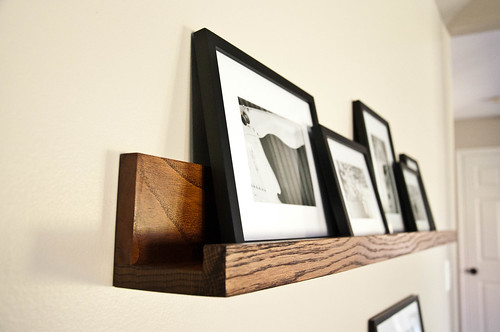 The frames from the two gallery wall kits create a pleasing uniformity.  I played around with them on our floor to determine the spacing between (18.5") and width (4') of the shelves before the project got underway. 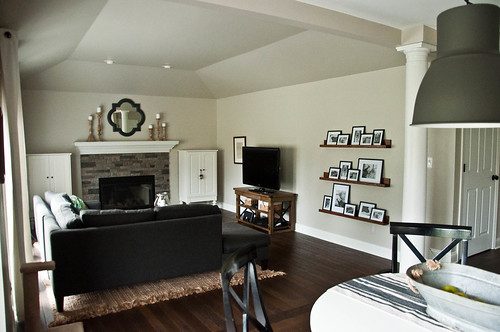 This was a hugely satisfying quick win as it met all of my goals for that wall.  On the other side of the entertainment stand I hung a 1924 map of Detroit that I bought for $15 on eBay and framed.  I think it balances that space appropriately.

My big goal for this summer is to get photos organized, albums created and ordered, and get pictures up on the walls.  Getting my hands on old family black and whites for these ledges is step one!
Posted by livinginduring at 5:22 PM