Creating a Christmas card display using a a large, empty frame is a super simple project! 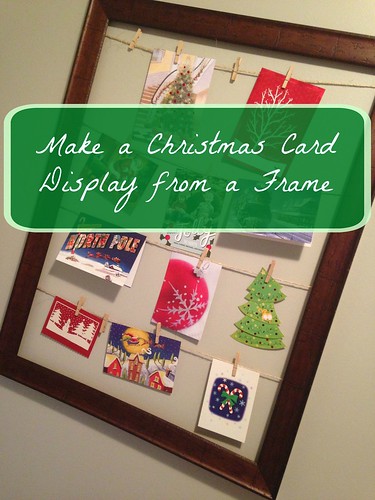 I don't wish mistakes on people, but am somewhat grateful that custom framers at craft stores occasionally make errors.  When they do, perfectly good and often very large frames are sold at reasonable prices.  There are so many uses for frames, it would just be a shame not to swing by the land of misfit frames on the occasional craft supply run, wouldn't it? 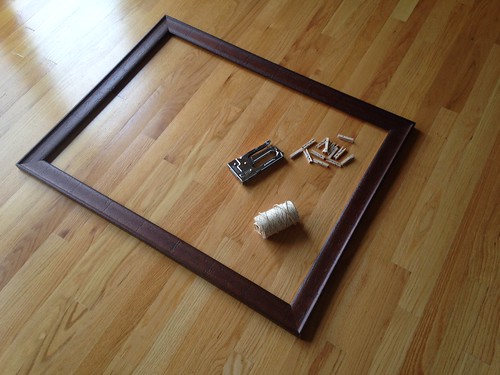 The one above is solid wood, roughly two feet wide by three feet tall, and cost less than $20.  Aside from not being exactly what some stranger custom ordered, it is flawless.  Still it waited in my basement for its pretty little destiny for months after I decided to go another way with the frames for Michael's gear wall over the summer.  While decorating for Christmas over this past weekend, the idea came to me.

Using just a roll of twine, a staple gun, and mini clothespins, I was able to turn the frame into a Christmas card display in the minutes between when I finished my lunch and my kids finished theirs.  I simply cut three strands of twine about two inches wider than the opening of the frame and stapled them at even Christmas-card-sized intervals. 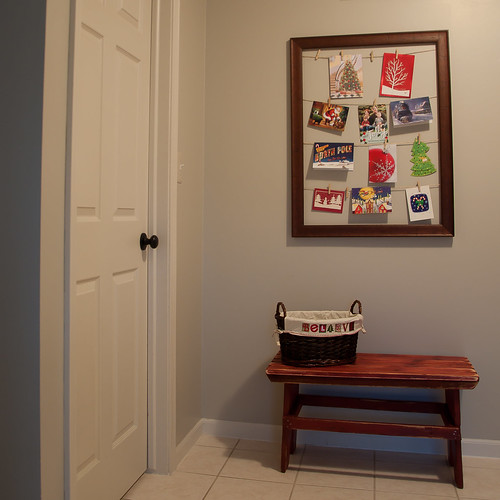 We recently picked up that red bench at an antique sale in a local barn, now a much needed shoe removal location.  The basket held goodies as part of a thoughtful housewarming gift last year and will now hold cards that don't make the cut  have already been displayed for a while and are rotated off the display.

A Christmas card display made from an large picture frame can easily transition into a family memo board if desired.  We use ours strictly for these cards, but the look is evergreen!

This is our second holiday season in this house, and details like this card holder and our updated fireplace are making it feel more genuinely like home than ever!  It's funny how the coldest time of year often feels the warmest.
Posted by livinginduring at 5:22 PM