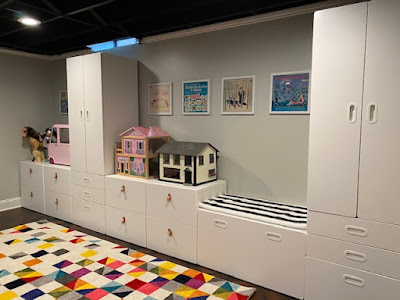 In addition to moving the toys and kids' craft supplies to their new homes in the basement, we have added a number of decorative and functional details such as a large, colorful rug and the kids' records. It's really come to life down there over the last month. 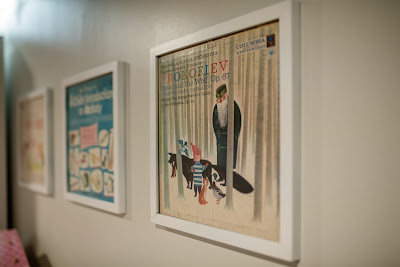 Framed record albums have been on one wall or another in our house for years now. Along with the record player, they most recently resided in our craft room where the kids would listen to Peter and the Wolf  while making their creations. 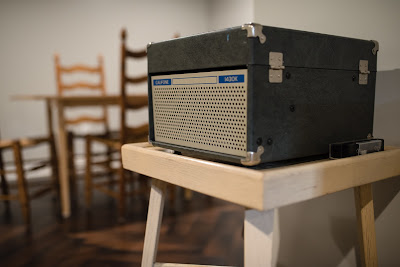 The craft room upstairs is now devoted to housing my photography gear, sewing supplies, and some home office items. In other words, it's a gloriously kid free zone.

Now Sophie and Michael listen, create, and play away happily in the basement, a relief in this time of staying at home.

One day I will totally support swapping out those framed albums for David Bowie and Pink Floyd when they're ready. For now, we're holding onto childhood and playtime for as long as we can. 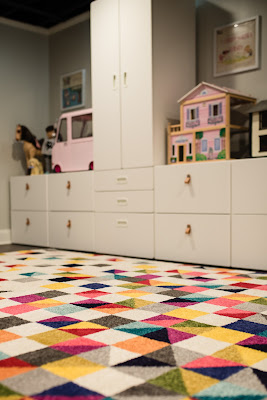 There are still some projects beyond the staircase and barn door that will get most of Mike's attention shortly. On the walls I plan to put up a photo ledge for the kids' artwork and a large whiteboard for games of Pictionary and so on. 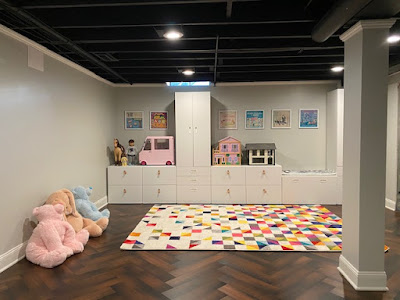 Sophie spent much of the first day that the basement was open for business sitting on that little bench that houses their costumes, reading away.

The rug just arrived this week and has been covered in Barbie clothes, Pokemon cards, and two lounging ten-year-old's for hours each day since. Cleaning up afterward is thankfully still somewhat fun for the kids (although not instinctual--does that ever happen?). The novelty of having big deep drawers devoted to their treasures is still pretty strong and has kept the groaning and sulking pretty minimal so far. 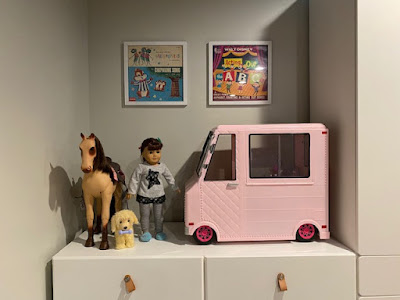 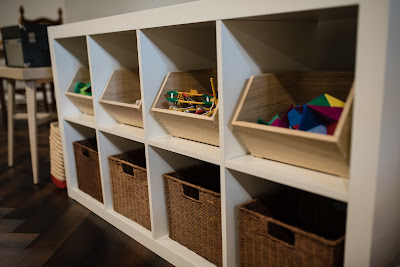 Reusing the kids' old playroom shelves as a building zone has been one of my favorite ideas for the basement. One really can't resist the K'nex and Lincoln Logs for long when they're staring right at you, and the creative juices get flowing. The kids know that mixing the various building toys into different bins would physically hurt me, and they have resisted so far. 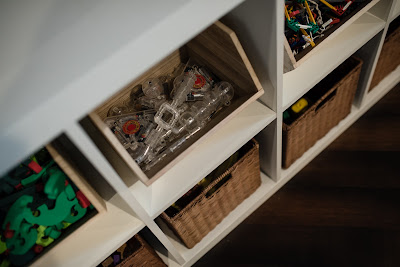 While the space was still under construction, I found a convertible table and ladder-back chairs on swap sites for next to nothing. We've already enjoyed some family game time in the basement as the table has worked out as intended for Monopoly, puzzles, and crafting. 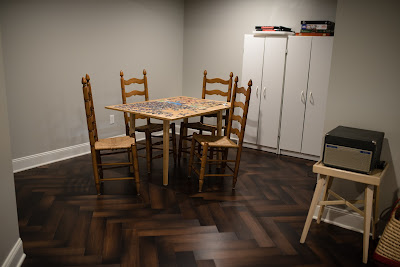 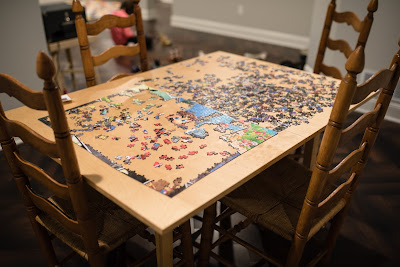 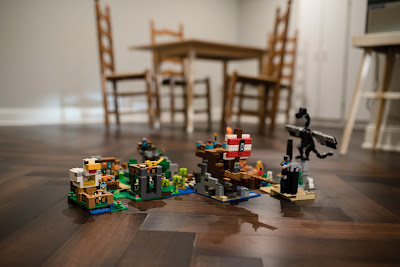 We're waiting for retail to get going again before we get the couch we've had our eyes on all along. A TV for movies and video games will be the final big purchase.

For now, the kids are enjoying the wide open area where the couch will go by creating elaborate Lego structures. It's been exciting to see how having some space to spread out and their toys in new and more accessible locations has inspired the Michael and Sophie to play more. The requests for screen time and petty arguments are inevitable, but this space has brought some joy and peace in a time when they're especially needed.
Posted by livinginduring at 9:33 PM No comments:

The Calm Before the Toys 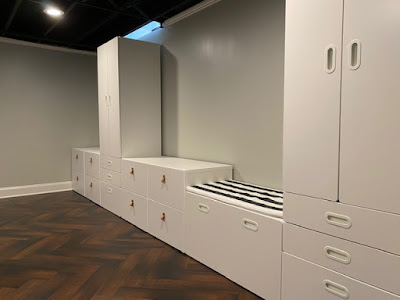 I enjoyed the calm before the toys on the morning before we moved them all into the basement and braced myself for the chaos on the way. However, I was pleasantly surprised by how willingly the kids let go of old toys and enthusiastically put their favorites in their new homes. There was still some work to do the day after (Lego organization for the kids; children's craft supplies for me) and I've never been more grateful for a home project taking so long. This work and its rewards are just what we need right now.

Since I took these pictures, the toys have arrived, we've put up some art on the walls, and we brought in a table and chairs that has already seen some cutthroat games of Monopoly. I'll share new pics soon (a rug is also on the way), but for now, just enjoy the calm. 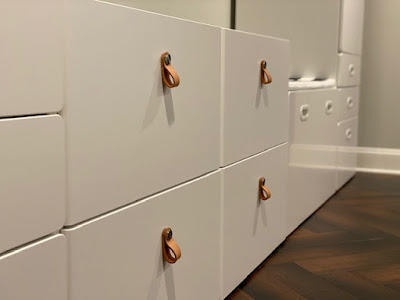 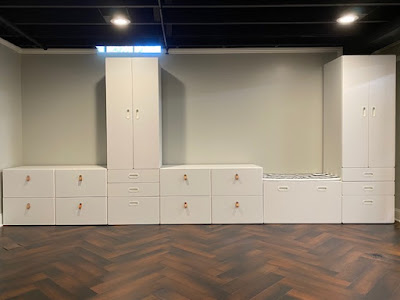 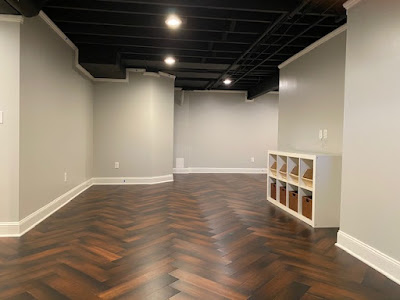 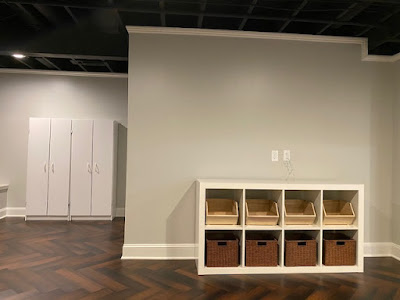 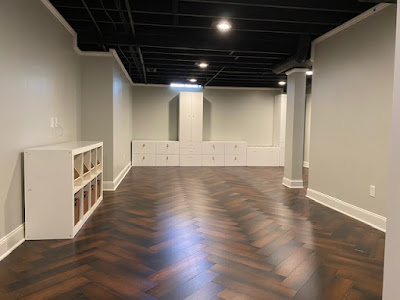 Posted by livinginduring at 5:22 PM No comments:

While Mike has taken on most of our home improvement projects to date, including finishing the basement in our previous house, we hired a basement finishing company back in the late fall to install the electrical and lighting, build our walls, and spray our ceiling black during the early winter. We had a budget to put toward the basement, Mike wasn't particularly excited about those initial tasks, and we were grateful to have had more time together around the holidays as a result.

Painting the walls (Repose Gray by Valspar), installing and painting trim, and laying down our flooring (engineered bamboo in a herringbone pattern) were tasks Mike did take on, and he checked the final touch-ups off that to-do list over this weekend. Take a look! 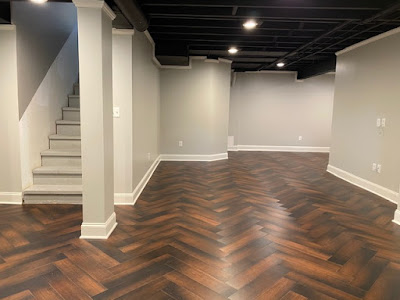 Upgrading the staircase and building and installing a barn door for the workshop are next on his project list. 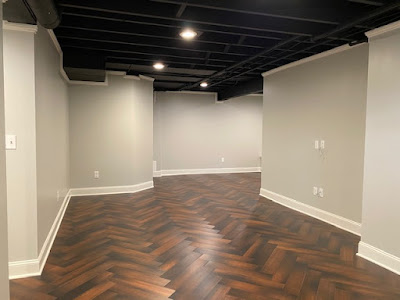 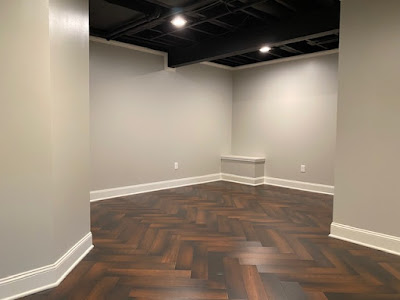 We have always been terrible about remembering to take before pictures, eager to just get improving. What you see below is representative of the state of the whole basement initially--cement walls and floor, bare light bulbs, generally depressing. 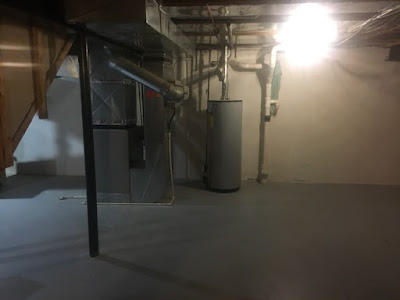 The bumped out walls in the far corner of the photo below surround the water heater and furnace in the storage room, accessible from the workshop (functional but in progress) to the left of the stairs. 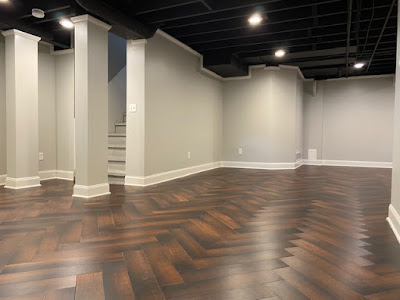 I can't wait to get this space up and running! Stay tuned.
Posted by livinginduring at 8:15 PM No comments:

Dreams of My Liquor Cabinet

I had an odd dream last night that the high school where I teach had lined the halls with vintage furniture.  I loved the laid back, creative vibe it created! Outside my own classroom door I recognized a cabinet with glass doors and realized the school wasn't decorating the space, they were getting rid of some of my favorite treasures.  It felt like a shame to me, and I was compelled to let folks know how these pieces could be repurposed! 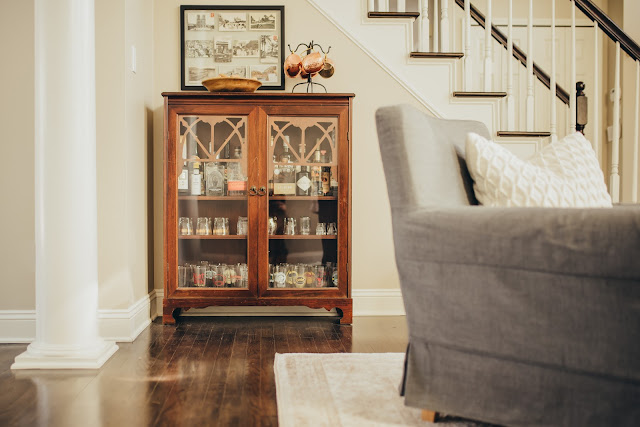 Yep, my subconscious is doing back-flips with the leave of absence I am taking from teaching this year.

Read more »
Posted by livinginduring at 1:28 PM No comments:

To display or not to display?

I recently came into possession of some old copies of six of Shakespeare's plays. 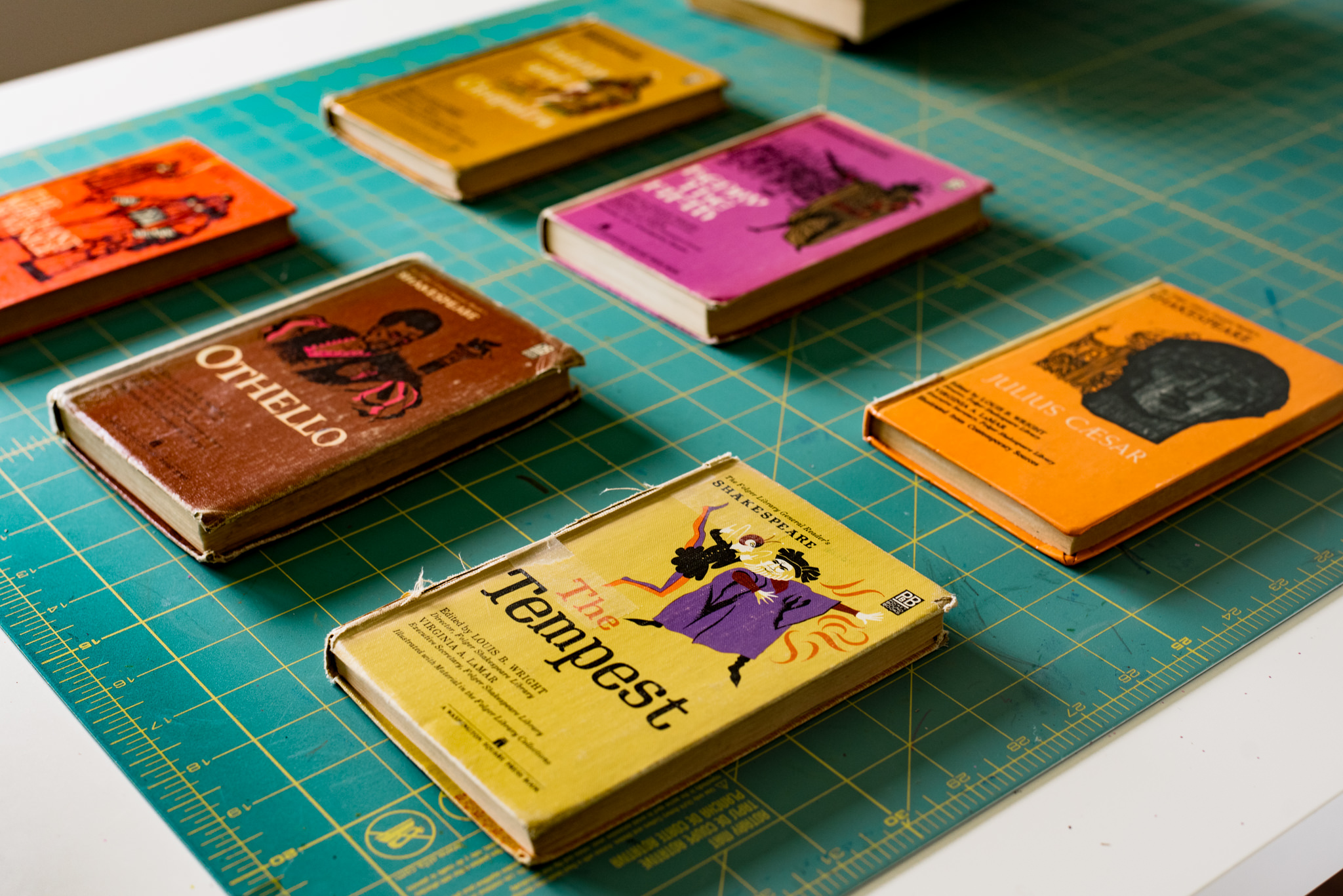 As a high school ELA teacher with a cat named Oberon (partly for the fairy king, partly for a good wheat beer) whose address and subdivision are also Shakespearean, I believe these should be on display around here.  I'm thinking of our walls.


Read more »
Posted by livinginduring at 12:07 PM No comments: 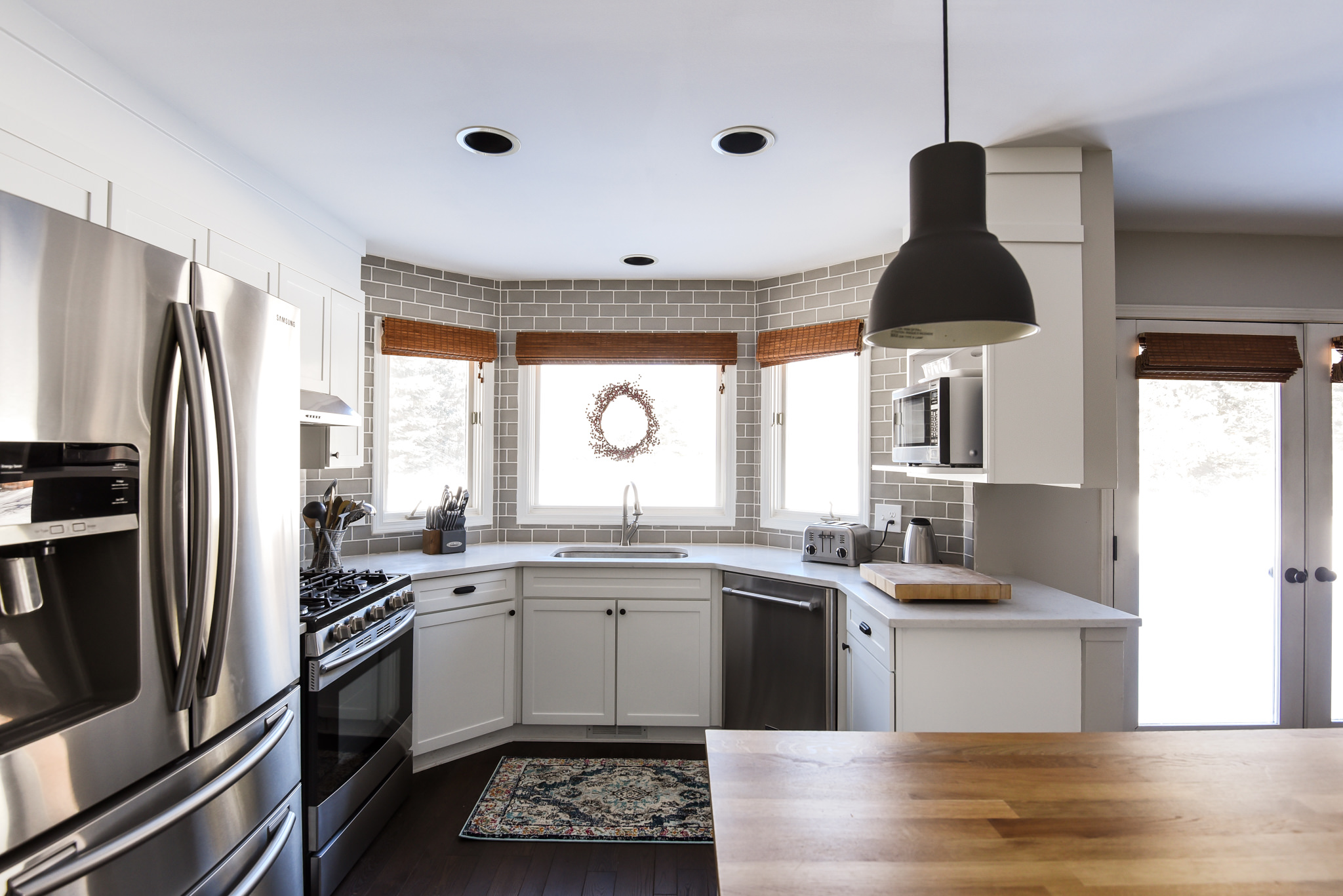 It's been a slow burning project, this kitchen.

It didn't strike Mike and me as a room in need of a full reno back in 2013 when we moved in, but as these things tend to go, one "little" update just led to another and another.

Read more »
Posted by livinginduring at 7:45 PM No comments:

One of the aspects of our kitchen that I grew to dislike over our first few years in this house is the space over our kitchen cabinets.  By no means was that space a major issue--we bought the house perfectly happy with that look, but I'm just not one for displaying knick-knacks and whatnot, so the open area felt empty. 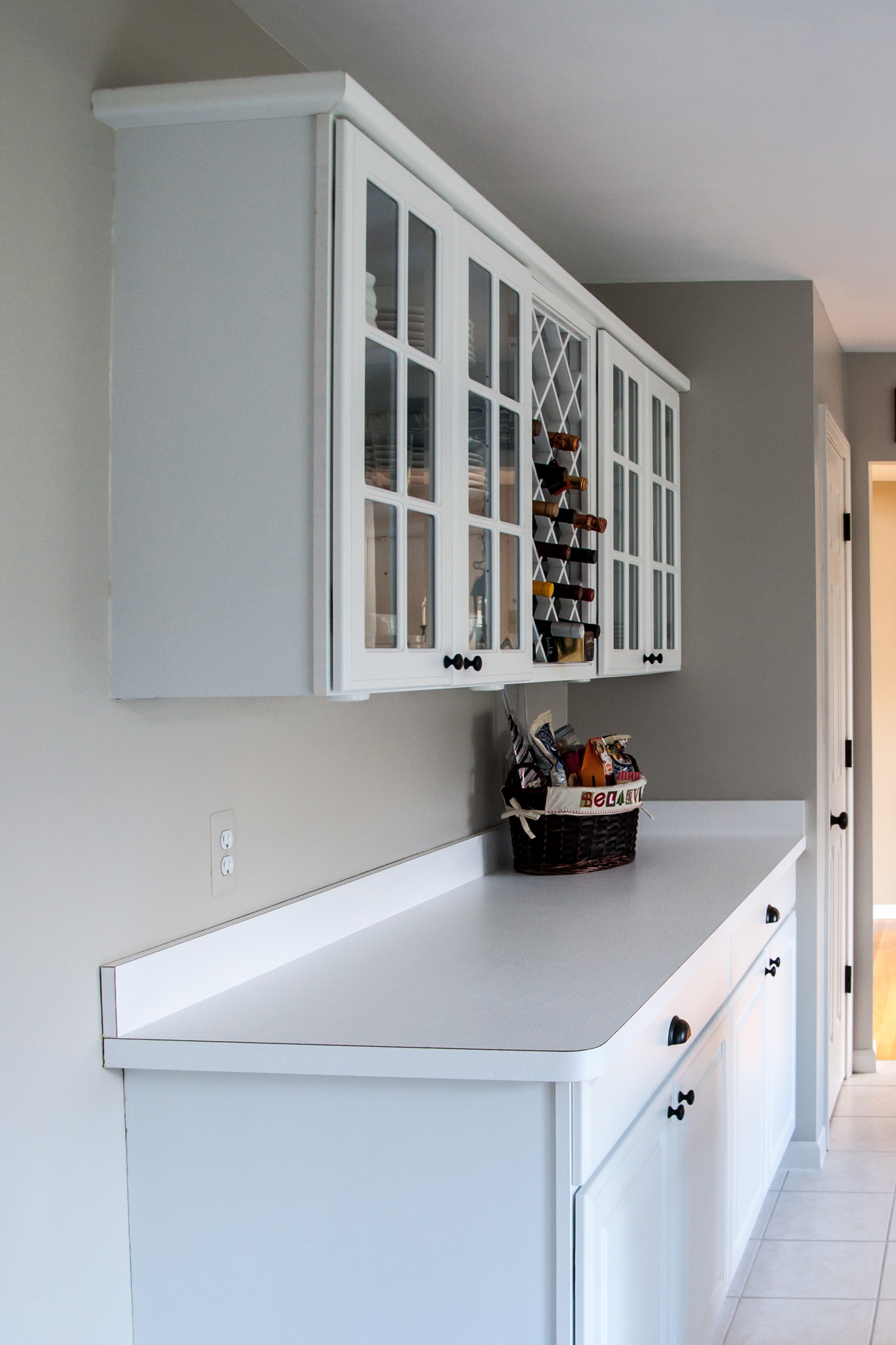 Instead of watching the open space fill with dust, Mike and I decided to find a way to customize it.

Read more »
Posted by livinginduring at 3:26 PM No comments: